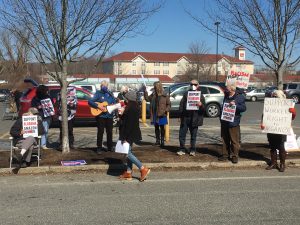 6,000 Amazon warehouse workers in Bessemer, Alabama are fighting for unionization. Throughout February and March they have been voting on whether to be represented by the Retail, Wholesale and Department Store Union (RWDSU). On March 20, dozens of solidarity rallies were held across North America. Supporters of the Bolshevik Tendency (BT) attended events in Canada and the U.S.

In Alabama and beyond, labor activists came out to support their brothers and sisters who are fighting the online retail giant. These rallies sent a clear message: No to union-busting! For workers’ rights and unionization! At a rally in Hadley, Massachusetts a supporter of the BT addressed the crowd:

“I am speaking to you as a healthcare worker and a revolutionary socialist. I am very happy that I can join you today in solidarity with the Amazon workers in Alabama who are fighting for unionization. The struggle for a union started over 100 years ago, and whether we organize in the factories, in the offices or on the farmland, it is the only way to advance our interests against those of the capitalist class. That’s why we need unions. But we don’t just need unions – we also need political representation. The Republican and Democratic parties do not represent us; they are the twin parties of capitalism. That is why we need a party of the workers! We must organize to defend our interests! That is why we stand in solidarity with the Amazon workers’ struggle for a union!”

If the workers in Alabama are victorious, it will inspire thousands more to follow in their footsteps. Socialists and organized labor must do everything in their power to support this important fight at Amazon.